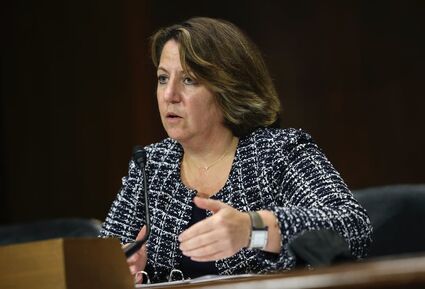 U.S. Deputy Attorney General Lisa Monaco testified on renewing and strengthening the Violence Against Women Act during a Senate Judiciary Committee hearing on Capitol Hill on Tuesday, Oct. 5, 2021 in Washington, D.C. Monaco confirmed prosecutors' consideration of what she termed the "fraudulent elector certifications" in an interview with CNN on Tuesday, Jan. 25.

Federal prosecutors are examining the decision by Republican electors in some states won by President Joe Biden in 2020 to send in signed statements purporting to affirm Donald Trump as the victor of the election, a top Justice Department official said Tuesday.

Their actions were criticized at the time as a political stunt meant to bolster Trump's unfounded claims of election fraud. But they have drawn additional scrutiny in recent weeks, as the House committee investigating the Jan. 6, 2021, attack on the Capitol seeks to understand the origin of the Trump elector slates, and two Democratic attorneys general, in New Mexico and Michigan, have asked federal prosecutors to investigate whether the certifications could amount to a crime.

Deputy Attorney General Lisa Monaco confirmed prosecutors' consideration of what she termed the "fraudulent elector certifications" in an interview with CNN.