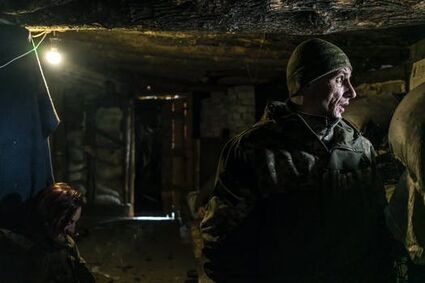 Ukrainian soldiers in a bunker on the front line on Monday, Jan. 24, 2022, in Popasna, Ukraine.

KYIV, Ukraine - Ukraine's leaders sought Tuesday to reassure the nation that an invasion from neighboring Russia was not imminent, even as they acknowledged the threat is real and received a shipment of U.S. military equipment to shore up their defenses.

Moscow has denied it is planning an assault, but it has massed an estimated 100,000 troops near Ukraine in recent weeks and is holding military drills at multiple locations in Russia. That has led the United States and its NATO allies to rush to prepare for a possible war.

U.S. President Joe Biden told reporters that Russian President Vladimir Putin "continues to build forces along Ukraine's border," and an attack "would be the largest invasion since World War II. It would change the world."