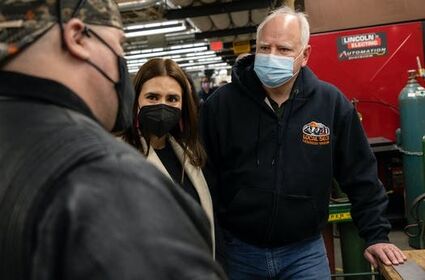 A student speaks to Lt. Gov. Peggy Flanagan and Gov. Tim Walz at Minneapolis Community and Technical College, where the governor highlighted the first part of his supplemental budget plan.

More than 2.7 million Minnesota households would get checks of $175 or $350 from the state under a spending plan Gov. Tim Walz unveiled Thursday, with money channeled to front-line workers and caregivers as well.

The DFL governor also wants to repay the state's unemployment insurance debt, a move that has bipartisan support and would prevent a potential large jump in payroll taxes for employers.

"Minnesotans want to see results. They want to see things that make sense. They want this surplus to come to their pockets, make their lives easier, reduce their costs and invest for things that go forward," the governor said during a news conference at Minneapolis Community and Technical College, where he highlighted the first of several pieces of a supplemental budget plan he will unveil over the next week.