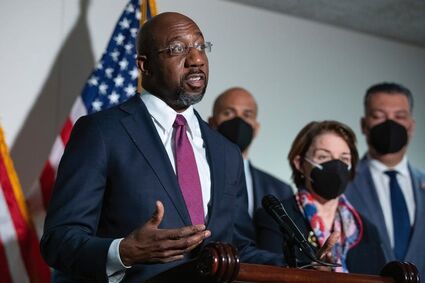 Sen. Raphael Warnock, D-Ga., speaks to reporters alongside Sen. Cory Booker, D-N.J., and Sen. Amy Klobuchar, D-Minn., and Sen. Alex Padilla, D-Calif., during a press conference regarding the Democratic party's shift to focus on voting rights at the Capitol in Washington, Tuesday, Jan. 18, 2022.

WASHINGTON - Voting legislation that Democrats and civil rights leaders say is vital to protecting democracy collapsed Wednesday when two senators refused to join their own party in changing Senate rules to overcome a Republican filibuster after a raw, emotional debate.

The outcome was a stinging defeat for President Joe Biden and his party, coming at the tumultuous close to his first year in office.

Despite a day of piercing debate and speeches that often carried echoes of an earlier era when the Senate filibuster was deployed by opponents of civil rights legislation, Democrats could not persuade holdout senators Kyrsten Sinema of Arizona and Joe Manchin of West Virginia to change the Senate procedures on this one bill and allow a simple majority to advance it.