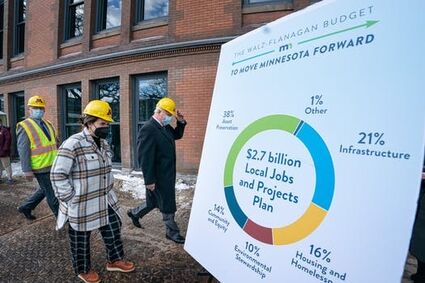 Gov. Tim Walz and Lt. Gov. Peggy Flanagan tour a construction project at the University of Minnesota where they announced their $2.7 billion plan to bolster infrastructure on Tuesday.

Gov. Tim Walz laid out a $2.7 billion construction funding plan Tuesday that he said will help ease a backlog of maintenance needs across the state while preparing Minnesota for the future.

"It sets up jobs in the skilled trades for a decade to come, and it tackles those issues, whether it is aging infrastructure or putting resiliency in" to address climate change, Walz said as he unveiled his plan at the University of Minnesota.