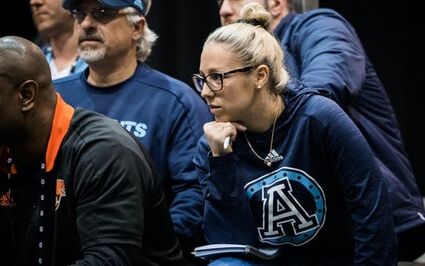 The Vikings are seeking to interview Catherine Raiche, the Eagles' vice president of football operations, for the team's general manager job. Raiche previous worked for two teams in the Canadian Football League.

The Vikings have requested to speak with eight candidates for their open general manager job, and could soon meet with the first female candidate to interview for a GM position in NFL history.

The team asked for permission to interview Catherine Raiche, the Eagles' vice president of football operations, according to a source with knowledge of the situation. Raiche, a Montreal native, has been in the Eagles' front office since 2019, after briefly working for the XFL's Tampa Bay Vipers and spending three years in the CFL with the Toronto Argonauts and Montreal Alouettes. Before working in football, she spent nearly three years as a tax lawyer in Canada.

Susan Tose Spencer, the daughter of former Eagles owner Leonard Tose, was the first female general manager in NFL history in 1983. Raiche would be the first woman to interview for a GM position, and, if hired, would become the second female GM in league history nearly 40 years after Tose Spencer did the job.