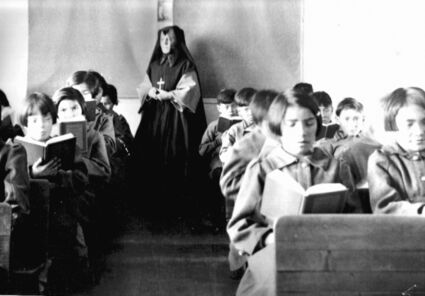 Photograph of students from Fort Albany Residential School reading in class overseen by a nun c 1945. From the Edmund Metatawabin collection at the University of Algoma. (Photo/WikiCommons)

An increasing number of Catholic organizations are joining the discussion about Indian boarding schools. But what role do they have to play in the pursuit of truth and healing, and who is their participation serving?

In November, Archbishop Paul Coakley of Oklahoma City, chairman of the U.S. Conference of Catholic Bishops' Committee on Domestic Justice and Human Development, and Bishop James Wall of Gallup, New Mexico, chairman of its Native American Affairs subcommittee, sent a letter on behalf of the organization to all U.S. bishops, encouraging them to initiate truth and healing discussions with local Nations.

"We encourage you to consider reaching out to local Tribal leaders, and begin, if you have not already done so, a dialogue about the schools that were historically in your areas, as well as any that continue in operation," the letter said. "The second goal of such a dialogue is to discern where reconciliation is needed and what form it might take."