Death toll in rockfall on Brazilian lake rises to 10 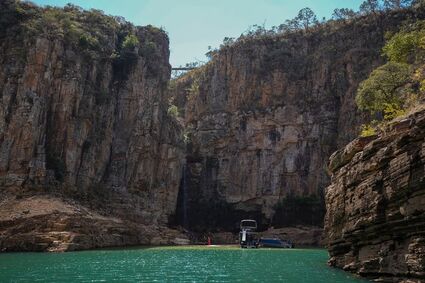 A tourist boat navigates through a canyon in Furnas Lake, near Capitolio City, Brazil, Sept. 2, 2021. A massive slab of rock broke away on Saturday, Jan. 8, 2022, from the canyon wall and and toppled onto pleasure boaters killing at least two people and injuring dozens at the popular tourist destination in Minas Gerais state.

BRASILIA, Brazil - The death toll from an accident in which a slab of cliff rock toppled onto pleasure boaters on a Brazilian lake has risen to 10, police said Sunday. Authorities worked to identify the dead and divers were searching the lake in case there were more victims.

Police Chief Marcos Pimenta said there was a possibility that some people were missing following the accident Saturday in Minas Gerais state. At least 32 people were injured, though most were released from hospitals by Saturday evening.

The accident occurred between the towns of Sao Jose da Barra and Capitolio, from which the boats had left. Video images showed a gathering of small boats moving slowly near the sheer rock cliff on Furnas Lake when a fissure appeared in the rock and a huge piece toppled onto several of the vessels.