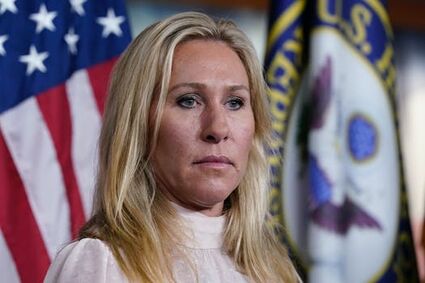 SAN FRANCISCO - Twitter said Sunday it had banned the personal account of far-right Rep. Marjorie Taylor Greene for multiple violations of the platform's COVID-19 misinformation policy, the latest strike against the firebrand whose embrace of conspiracy theories has been called "a cancer" for the GOP and led the House to boot her from committees.

The Georgia Republican's account was permanently suspended under the "strike" system Twitter launched in March, which uses artificial intelligence to identify posts about the coronavirus that are misleading enough to cause harm to people. Two or three strikes earn a 12-hour account lock. Four strikes prompt a weeklong suspension. Five or more strikes can get someone permanently removed from Twitter.

In a statement on the messaging app Telegram, Greene blasted Twitter's move as un-American. She wrote that her account was suspended after tweeting statistics from the Vaccine Adverse Event Reporting System, a government database that includes unverified raw data.