Thielen tried playing through a high ankle sprain suffered Dec. 5 in Detroit but aggravated the injury Sunday in his return 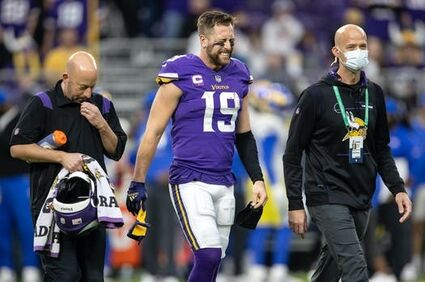 Adam Thielen reinjured his ankle during Sunday's loss to the Rams at U.S. Bank Stadium.

The veteran receiver tried playing despite high ankle sprain suffered Dec. 5 when Lions cornerback Jerry Jacobs landed on Thielen's left leg. He returned three weeks later against the Los Angeles Rams, aggravating the injury in the second quarter when he was tackled low.

"Hope he heals up good," running back Dalvin Cook said, "get everything intact and get it right. Since I got here, he's been a true brother; true meaning of brother, not even football-related. Just being there for me. So I'm going to do the same for him, whatever he need. We're going to miss him out there."