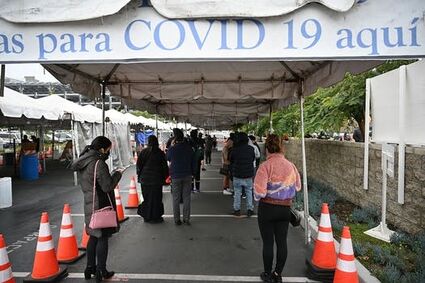 People waited in line for a COVID-19 test in Los Angeles on Dec. 27.

The Centers for Disease Control and Prevention estimated that the omicron variant now accounts for roughly 59% of all COVID cases in the United States, a significant decrease from the agency's previous estimate. The update shows how hard it is to track the fast-spreading variant in real time and how poorly the agency has communicated its uncertainty, experts said.

Last week, the CDC said that omicron accounted for approximately 73% of variants circulating in the United States in the week ending Dec. 18. But in its revision, the agency said the variant accounted for about 23% of cases that week.

In other words, delta, which has dominated U.S. infections since summer, still reigned in the United States that week. That could mean that a significant number of current COVID hospitalizations were driven by infections from delta, Dr. Scott Gottlieb, a former commissioner of the Food and Drug Administration, suggested on Twitter. Hospitalizations typically lag several weeks behind initial infections.