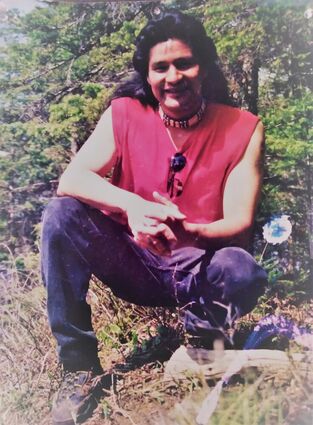 Mickodegonab was a bright light, a shining star on Mother Earth who guided the spirituality of many people nationwide. He was a traditional Ojibwe man who lived simply. He taught others that each day we lived was a gift from the Creator. He taught that it is important to communicate at a level where our hearts and minds are connected. His father taught him "we are only passing through this world" and what we do while we are here is vitally important to what we carry with our Spirits to the Spirit World.

His early years were full of historic trauma and he made some choices that he deeply regretted his entire life. By 1998, his mom Evelyn Lightfeather, had become a 'mom' to Josephine. It was through Evelyn that Jo met Mickodegonab, who became her sweet gentle giant, protector, and the absolute love of her life. A powerful healing spirit that had helped Mickodegonab in his youth and had been with him since, chose Jo to walk beside him as his partner in life. In 2000, their Spirits met in sweat lodge ceremony, which was witnessed by his mother and the healing drum he carried.

Mickodegonab was a warrior. He was a drum carrier, he walked with honor and dignity. He respected and lived by the 7 Grandfather Teachings. He was grateful for all he had been given.

He loved testing his physical, emotional, and spiritual strengths outside or in the wood. He enjoyed fishing, trapping, canoeing, camping, and watching/listening to the animals. He was content to be at home with the drum and Jo, protecting both.

As partners in life, they saw both difficult and joyous times. He was Jo's husband and she was his wife. And the passage of time or the passage into the next world will not change that. He knew how to love unconditionally and he knew Jo loved him unconditionally. Pure Spirit Love. We were fortunate to have had him with us here on Mother Earth, and he will greatly missed. Mickodegonab's words and teachings will not be forgotten.

He was preceded in death by his parents Evelyn Lightfeather and Harry Lightfeather Sr., his brothers Leo, Leonard, Jerry and Harold Lightfeather, and his sister Beverly Miller.

All Night Wake will take place on Sunday, December 19, 2021, with visitation beginning at 4:30 pm. Wake Service will be at 6pm. The Funeral Service will be Monday, December 20, 2021 at 10:00 am. Spiritual Advisor is Allen Hardy, with helper Gene Goodsky. All services will be held at the Bois Forte Tribal Government Center in Nett Lake, Minnesota.