To date The Front Line Foundation has paid out more than $300,000 in death benefits and equipment donations to Minnesota's First Responders 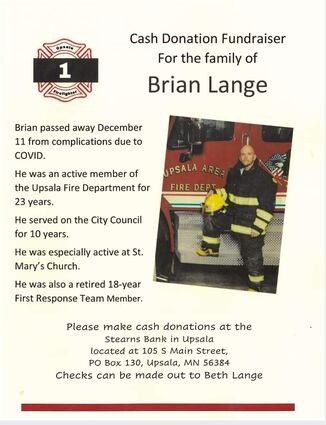 MINNEAPOLIS, MN (Dec. 21, 2021) – The Front Line Foundation (TFLF) announced today that it has granted death benefits to support to the family of Upsala firefighter Brian Lange who died on Saturday, December 11 of a medical illness connected with his service. Lange, 55, was a 22-year veteran of the Upsala Volunteer Fire Department.

This donation comes on the heels of TFLF's granting of death benefits to the family of St Paul firefighter Mike Paidar who died of occupational-related cancer in September. Paidar, 53, became a St. Paul firefighter in 2011 and also served as an on-call firefighter in Maple Grove, where he lived. Prior to becoming a firefighter at age 44, he was a photojournalist for KSTP-TV for a dozen years.

The payments to Paidar and Lange bring the total of first responder families supported to seven for the year 2021. To date TFLF has paid out $318,000 in death benefits and equipment funding since its inception in 2018.

"We feel extremely fortunate to be able to help the families of these fallen first responders in a way that will help significantly," said Suzanne Holt, TFLF President & CEO. "These two men paid the ultimate sacrifice for their service. We want their families to know how much the Foundation appreciates their service to keeping all of us safe."

Founded in late 2018, The Front Line Foundation was formed to support Law Enforcement Officers, Firefighters, EMTs and members of the National Guard across Minnesota, to grant financial support to families of first responders who have died in the line of duty.

The Foundation's mission is to bridge the gap between the death and benefits being paid, which can help families with ongoing expenses. The Foundation also provides support in the purchase of tactical equipment for first responders which isn't included in department budgets.

About the Front Line Foundation:

The Front Line Foundation began as an attempt to help and support our Fallen Heroes, including Law Enforcement Officers, Firefighters, EMTs, and the Minnesota National Guard. The Frontline Foundation provides support to those who died while in the line of duty, by giving benefit payments to dependents of fallen first responders. Law Enforcement Officers, Firefighters, and EMT First Responders face armed and dangerous criminals, impaired individuals wielding weapons, even emotionally charged, and threatening domestic disputes. They are The Front Line Defenders of our neighborhoods, towns, and cities who face and diffuse the high-risk, frequently appalling situations we know or hear about, with disbelief, on the news. In addition to providing endowments and support for the families of fallen heroes, The Front Line Foundation will underwrite scholarships and training registration costs for Front Line personnel as well as support preparedness training for safety officers in hospitals, schools, and places of worship. Further, we assist with the purchase of needed safety and tactical equipment not currently within the budget of the local unit of government. For more information, please visit http://www.thefrontlinemn.org