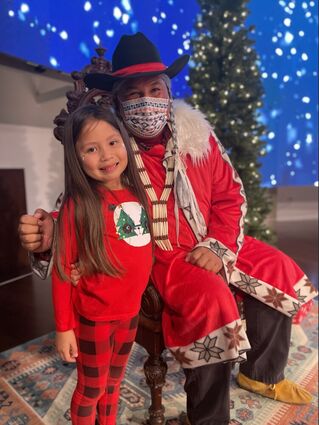 Aidan Underwood (Comanche) age 6, met with Santa over the weekend. "She loved him," her mom Ginny said of their encounter. "She really liked his robe." (Photo/Courtesy Ginny Underwood/First Americans Museum)

Santa wore his long grey braids and traditional red robe-turned-regalia over the weekend, greeting children and adults alike at the newly opened First Americans Museum in the heart of Oklahoma City. Behind him was a digital screen showing a downpouring of snow over his sleigh, pulled by eight bison.

The event was free and open to the public on Saturday and Sunday, and drew far more adults to snap a photo with Santa than it did children. On Saturday, 75 children-many dressed in their tribe's traditional regalia- and more than double the amount of adults took their photos with Indigneous Santa.