US releases new batch of documents about JFK assassination 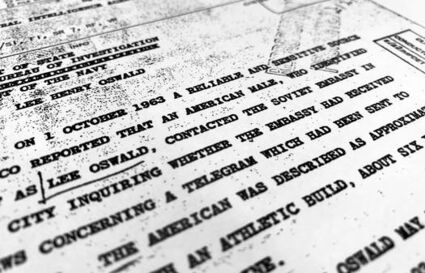 Part of a file from the CIA, dated Oct. 10, 1963, details "a reliable and sensitive source in Mexico" report of Lee Harvey Oswald's contact with the Soviet Union embassy in Mexico City.

WASHINGTON - The National Archives on Wednesday made public nearly 1,500 documents related to the U.S. government's investigation into the 1963 assassination of President John F. Kennedy.

The disclosure of secret cables, internal memos and other documents satisfies a deadline set in October by President Joe Biden and is in keeping with a federal statute that calls for the government to release records in its possession concerning the Kennedy assassination. Additional documents are expected to be made public next year.

There was no immediate indication that the records contained new revelations that could radically reshape the public's understanding of the events surrounding the Nov. 22, 1963, assassination of Kennedy in Dallas at the hands of gunman Lee Harvey Oswald.