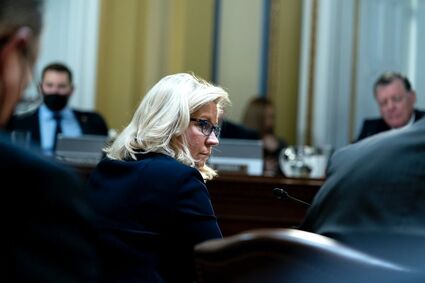 Rep. Liz Cheney (R-Wyo.) speaks during a House Rules Committee hearing at the Capitol in Washington on Tuesday, Dec. 14, 2021, regarding the Jan. 6 committee recommendation to charge Mark Meadows with criminal contempt of Congress for defying its subpoena.

WASHINGTON - The House voted Tuesday to hold former White House chief of staff Mark Meadows in contempt of Congress after he ceased to cooperate with the Jan. 6 Committee investigating the Capitol insurrection - making it the first time the chamber has voted to hold a former member in contempt since the 1830s.

The near-party-line 222-208 vote is the second time the special committee has sought to punish a witness for defying a subpoena. The vote is the latest show of force by the Jan. 6 panel, which is leaving no angle unexplored - and no subpoena unanswered - as it investigates the worst attack on the Capitol in more than 200 years. Lawmakers on the panel are determined to get answers quickly, and in doing so reassert the congressional authority that eroded while former President Donald Trump was in office.