First contest winner at a BSU game since February, 2020 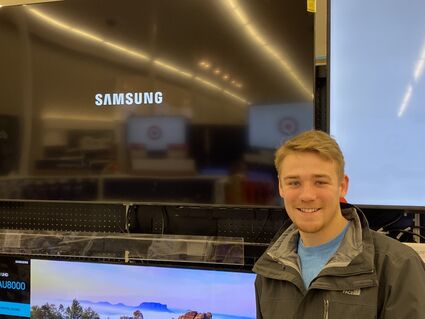 (Bemidji, MN) (December 15, 2021) – For the first time since February of 2020, there was a winner of the Paul Bunyan Communications Hockey Hot Shots Promotion during a Bemidji State University men's home hockey game!

Garrett Peterson of Hawley, MN made his shot at center ice during a period intermission at the Beavers game Friday, December 10 against Mankato to win a 70" Smart HDTV. Garrett is a junior at Bemidji State University majoring in environmental science.

"I was pumped. One of the contestants before me came close so I knew there was a chance. There wasn't much to cheer about for us Beaver fans that night so it was really cool to make it and hear the crowd come to life!" said Peterson.

"We've been sponsoring the contest for a long time dating back to games at the John Glas Fieldhouse. The contest wasn't held during the 2020 season with no fans in the stands so it's great to have it back and to get a winner again!" said Brian Bissonette, Paul Bunyan Communications Marketing Supervisor.

You can see video of Garrett making the shot on the Paul Bunyan Communications YouTube page at https://www.youtube.com/watch?v=Pmzn4zz55Vg

The Paul Bunyan Communications Hockey Hot Shots contest is held during an intermission at select Bemidji State University Men's Hockey home games. Three contestants are selected at random to participate each night. All contestants receive a coupon for a free PBTV On Demand movie rental, any contestant hitting the board receives a Paul Bunyan Communications Bluetooth speaker, and a contestant who puts the puck in the net through the middle of the Hockey Hot Shots board wins up to a 70" Smart HDTV.

Paul Bunyan Communications has the region's largest and fastest all fiber optic network with over 6,000 square miles throughout most of Beltrami County and portions of Cass, Hubbard, Itasca, Koochiching, and St. Louis Counties. The Cooperative provides fiber optic fast Internet speeds up to 10 Gig powered by the GigaZone, television services, digital voice services, Residential and Business IT services, and is also the home of northern Minnesota's certified Apple Service Center.