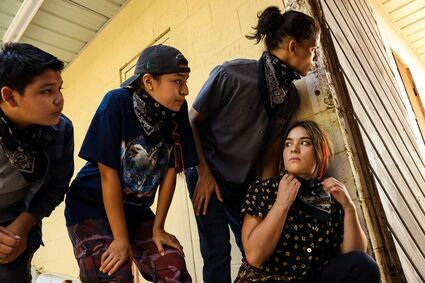 Reservation Dogs is up for a major award after its debut season.

Reservation Dogs, which features all Native talent in the lead roles, has been recognized by the Golden Globe Awards. The show, which premiered on FX on Hulu in August, is one of five nominees for Best Television Series – Musical or Comedy.

Reservation Dogs was developed by co-creators and executive producers Sterlin Harjo (Seminole / Muscogee) and Taika Waititi (Maori). Season one of the half-hour comedy follows four Native teenagers whose dream is to get to California.

The show is set in a fictional community on a fictional reservation in Oklahoma. All of the lead roles are played by Native actors: D'Pharaoh Woon-A-Tai as Bear Smallhill; Devery Jacobs as Elora Danan; Paulina Alexis as Willie Jack; and Lane Factor as Cheese.