Kentucky tornado toll in dozens; less than feared at factory 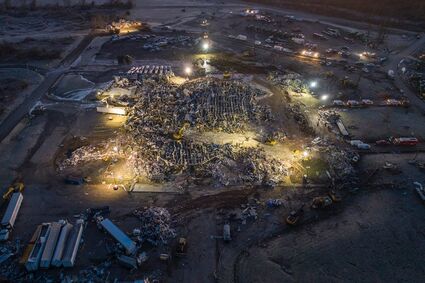 MAYFIELD, Ky. - Workers on the night shift at Mayfield Consumer Products were in the middle of the holiday rush, cranking out candles, when a tornado closed in on the factory and the word went out: "Duck and cover."

Autumn Kirks pulled down her safety goggles and took shelter, tossing aside wax and fragrance buckets to make room. She glanced away from her boyfriend, Lannis Ward, and when she looked back, he was gone.

Gov. Andy Beshear initially said Saturday that only 40 of the 110 people working in the factory at the time were rescued, and that "it'll be a miracle if anybody else is found alive in it." But on Sunday, the candle company said that while eight were confirmed dead and eight remained missing, more than 90 others had been located.