Vikings roll to big lead, hang on to defeat Steelers 36-28 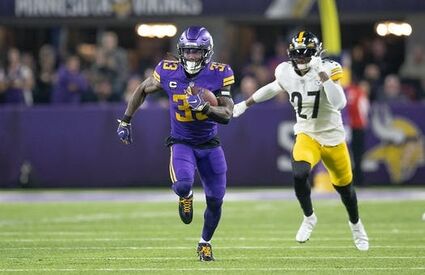 Dalvin Cook of the Vikings rolled up some rushing yardage Thursday night against the Steelers at U.S. Bank Stadium.

Dalvin Cook was a game-time decision, and the decision was the right one.

The Vikings running back, his dislocated left shoulder strapped up, set a team record with 153 first-half rushing yards as his team rolled to a big early lead, then held on for a 36-28 victory over the Pittsburgh Steelers.

Cook finished with a 205 yards on 27 carries as the nationally-televised Thursday Night Football matchup drew 66,718 to U.S. Bank Stadium.