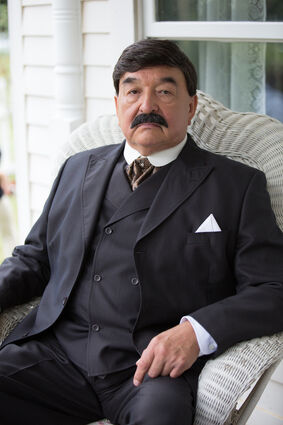 Graham Greene portrays Chickasaw Nation Governor Douglas H. Johnston in Chickasaw Nation Productions' feature film "Te Ata" (pronounced TAY' AH-TAH). The film is based on the inspiring, true story of Mary Frances "Te Ata" Thompson Fisher, a woman who traversed cultural barriers to become one of the greatest First American performers of all time. She was born in Indian Territory and raised on the songs and stories of her Chickasaw culture. Governor Johnston was Te Ata's uncle.

Te Ata's journey to find her true calling led her through isolation, discovery, love and a stage career that culminated in performances for a United States president, European royalty and audiences across the world. Yet, of all the stories she shared, none are more inspiring than her own.

Chickasaw Nation Governor Douglas H. Johnston was the first Chickasaw governor to be appointed by the president of the United States in 1906. He served as governor for more than 30 years until his death in 1939.

Greene's many stage credits include "The Crackwalker," "Jessica," "History of the Village of the Small Huts" and "DY Lips Oughtta Move Kapuskasing," for which he won the Dora Maver Moore Award for Best Actor.

Greene co-starred in "Dances with Wolves," which garnered an Oscar nomination. Since then, his many film credits include "Die Hard with a Vengeance," "North," "Green Mile," "Maverick" and "Snow Dogs."

His many television credits include "Exhibit A," "Rocket Science," "Wolf Lake," "The Red Green Show," "North of Sixty" and "Dudley the Dragon," which earned Greene two Gemini awards and a recurring role on the Netflix original drama, "Longmire."

Some of Greene's other projects include "Spirit Bear," "We Are Boats" "The Shack" and "Wind River."

Greene resides outside of Toronto with his wife, Hilary, where he continues to write, build boats and work in the entertainment industry.

"Te Ata" is now available to stream on Netflix.