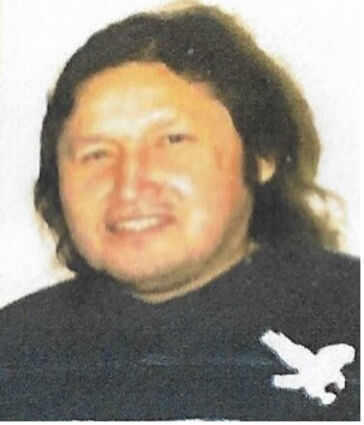 Jacob started his earthly journey January 6, 1958, in Devils Lake to Joseph F. Abraham and Marie Jerome. He was 63 years old; he started his journey home to the Creator on December 1, 2021.

Jake was also given a second Dakota name by his father-in-law a few years ago, Wakan Duta (Red Spirit). Jacob's funeral services will be held at the St. Michael's church on December 7, Tuesday morning at 10:30 am. The procession will leave from the City Center Plaza at 9:00 am, visitation will be from 9:30 am to 10:30 am. The burial will be at the Tokio, N.D. Dakota Oyate cemetery.

Jacob lived and grew up on the Spirit Lake reservation, he attended school at Little Flower Mission school in St Michael's N.D. He was raised by his foster parents and thought of them as his mom and dad, he was the youngest in his home and was spoiled by his Hunka parents Fred and Lena Jetty. Jacob was baptized as a Catholic, his God parents were Pat and Eleanor Langstaff (both deceased).

Jacob taught himself how to play guitar along with his brother Kenneth, they both loved music and eventually wound up in a band known as "Red Spirit". The band played rock and roll music and held events that rocked the Rez! On a visit with his older sister while he in the hospital she was reading him comments on her Facebook page she wrote about him, as she read him many of the comments, she noticed he had a moment of silence and he looked at her and said, "sis I'm still a rock star!" with a big smile.

Jacob had a humorous heart and a cute shyness about him that he became known for, he never had a negative comment about anyone, he loved to talk to many people and have fun.

Jacob liked to attend the Pow-wow held every year on Spirit Lake and enjoyed watching the dancers and socializing with relatives and friends. Jake was loved and will be missed dearly by his family and friends.

Jacob was named after his Great-Grandfather Jacob (Oyesna) Abraham, he will be met by his 7th generation ancestors who were true warriors of their time. Chief Waanatan, Tiyowaste, Inkpaduta, Hehakahajin, Nagiskata, Sihahanska, Makeidaya. Before his passing his sister read him a letter written by his Aunt Sylvia Weber. In that letter she talked about her grandfather who was a spiritual man, she talked about how he would load up all his grandchildren in the buckboard wagon and off to church they would all go. She expressed how much Jacob's father Joseph had a great respect for his Grandfather Jacob (Oyesna). Jacob inherited his Great Grandfather name given to him by his father.

There was always a special bond between Jacob and Myra Pearson the parents of their children that lasted his lifetime.

Music by Lake Region Drum Group and all other Drummers and Singers are welcome to share their songs in memory of Jacob.

If we forgot to mention anyone, please forgive us it was not our intention.

Gathering of family and friends