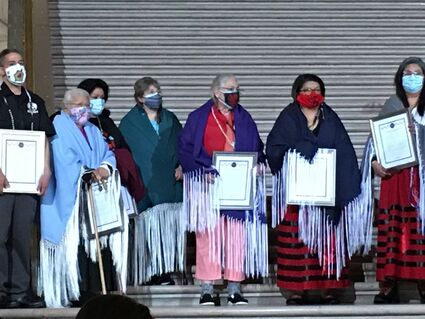 SAN FRANCISCO--Mayor London Breed, speaking at the annual American Indian Heritage Night ceremony under the rotunda in City Hall Nov. 18, announced that she would do "whatever it takes to make sure there is an American Indian Cultural Center."

Former mayors Willie Brown and the late Ed Lee both honored and recognized the city's Native American community, said April McGill, the Cultural Center's executive director, but "Mayor Breed is the first mayor to give us equitable funds in order to continue work in each of our community organizations." McGill is an enrolled member of the Round Valley confederation, and is of Yuki, Little Lake, Wailaki, Pit River, and Wappo heritage.

The $3.2 million approved by Mayor Breed this year is for cultural programming and behavioral health and wellness services. The funds will provide operating expenses to support programs at the new cultural center, within the American Indian Cultural District, established in the Mission in 2019. The grant will also help the Native American Health Center, the Friendship House Association of American Indians, and the International Indian Treaty Council in San Francisco.