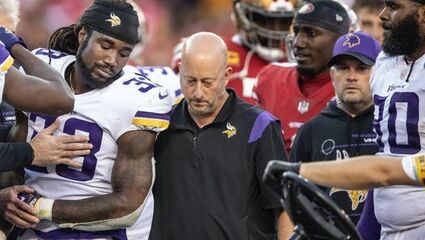 Dalvin Cook leaves the game in the third quarter from a shoulder injury as trainer Eric Sugarman helps him.

Vikings running back Dalvin Cook dislocated his left shoulder on a third-quarter fumble during Sunday's loss to the 49ers, and he could miss some time following the results of a MRI on Monday morning.

Cook tore the labrum in his left shoulder, as first reported by NFL Network. A source familiar with the injury said a labral tear almost always accompanies a dislocated shoulder, meaning the result of Cook's MRI was widely expected, but the injury continues the running back's history of shoulder issues dating back to college.

He had surgery on his right shoulder at Florida State in 2016, and missed the final two games of the 2019 regular season after tearing the labrum in his right shoulder. The Vikings chose to sit Cook and get him ready for the playoffs, and he returned with 130 yards from scrimmage in their wild-card victory over the Saints.