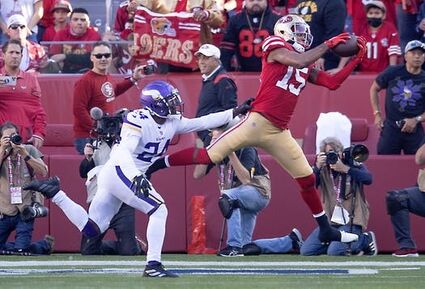 49ers wide receiver Jauan Jennings made a grab in the end zone for a touchdown despite defensive efforts from Vikings cornerback Mackensie Alexander in the second quarter.

The game turned at the end of the first half and beginning of the second, as the 49ers strung together three consecutive touchdown drives, helped by a Kirk Cousins interception, to take a 28-14 lead.

The Vikings had several chances to tie the game in the fourth quarter after Kene Nwangwu returned a kickoff for a touchdown to pull them to 31-26. But they failed to convert a fourth and goal and then, after a Robbie Gould missed field goal gave them the ball at their own 32 with about two minutes left, the Vikings could only get one first down.