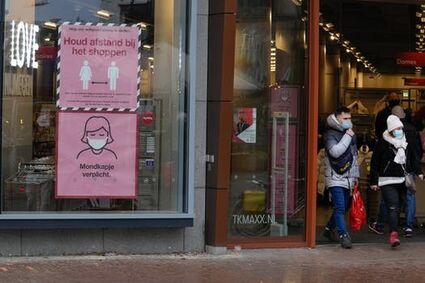 THE HAGUE, Netherlands - Cases of the omicron variant of the coronavirus popped up in countries on opposite sides of the world Sunday and many governments rushed to close their borders even as scientists cautioned that it's not clear if the new variant is more alarming than other versions of the virus.

The variant was identified days ago by researchers in South Africa, and much is still not known about it, including whether it is more contagious, more likely to cause serious illness or more able to evade the protection of vaccines. But many countries rushed to act, reflecting anxiety about anything that could prolong the pandemic that has killed more than 5 million people.

Israel decided to bar entry to foreigners, and Morocco said it would suspend all incoming flights for two weeks starting Monday - among the most drastic of a growing raft of travel curbs being imposed by nations around the world as they scrambled to slow the variant's spread. Scientists in several places - from Hong Kong to Europe - have confirmed its presence. The Netherlands reported 13 omicron cases on Sunday, and both Canada and Australia each found two.