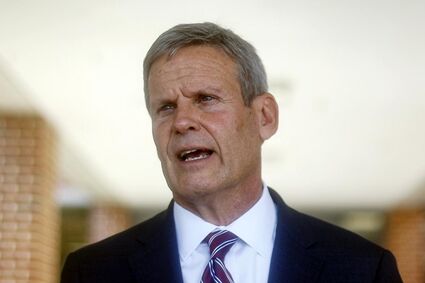 Tennessee Gov. Bill Lee speaks to local media at the front of McConnell Elementary School on Aug. 11, 2021 in Hixson, Tenn. Emails obtained by The Associated Press show that Lee's office warned top legislative staffers that a bill limiting public health measures during the COVID pandemic would violate federal law. They passed it anyway and the Republican governor signed it into law even though his legislative counsel warned that Tennessee risks losing federal funding for violating the Americans with Disabilities Act. (Troy Stolt/Chattanooga Times Free Press via AP, File)

The Republican-controlled Legislature ignored the advice and passed the bill anyway. Less than two weeks later, the Republican governor signed it into law.

Lee, who is up for reelection next year, has since said there are still "some issues we need to work through." He has his concerns about how the law changes hospital visitation rules and what it may mean for the state's ability to control its own workplace regulation going forward. But the governor has expressed no concern publicly about compliance with the Americans with Disabilities Act.