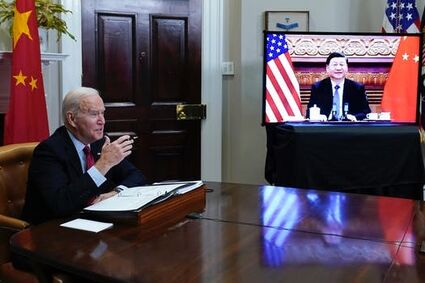 BEIJING - China on Tuesday welcomed a virtual meeting between President Xi Jinping and U.S. President Joe Biden as raising hopes for better relations, while the U.S. was more muted on the talks as the world's two biggest powers sought to ratchet down more than a year of tensions.

The leaders appeared to put aside the language of acrimony in their first formal meeting since Biden took office. Xi greeted the U.S. leader as his "old friend," and Chinese Foreign Ministry spokesperson Zhao Lijian said the exchange was candid and constructive.

"If China-U.S. relations cannot return to the past, they should face the future," Zhao said, calling the meeting "conducive to increasing positive expectations ... for U.S.-China relations."