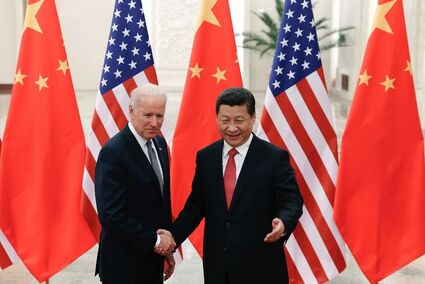 FILE - Chinese President Xi Jinping, right, shakes hands with Vice President Joe Biden as they pose for photos at the Great Hall of the People in Beijing, Dec. 4, 2013. As President Joe Biden and Xi Jinping prepare to hold their first summit on Monday, Nov. 15, the increasingly fractured U.S.-China relationship has demonstrated that the ability to connect on a personal level has its limits. Biden nonetheless believes there is value in a face-to-face meeting, even a virtual one like the two leaders will hold Monday evening.

WASHINGTON - President Joe Biden opened his virtual meeting with China's Xi Jinping on Monday by saying the goal of the two world leaders should be to ensure that competition between the two superpowers "does not veer into conflict."

Xi greeted the U.S. president as his "old friend" and echoed Biden's cordial tone in his own opening remarks, saying, "China and the United States need to increase communication and cooperation."

While the two leaders opened their meeting with friendly waves, they were meeting at a time of mounting tensions in the U.S.-China relationship. Biden has criticized Beijing for human rights abuses against Uyghurs in northwest China, suppression of democratic protests in Hong Kong, military aggression against the self-ruled island of Taiwan and more. Xi's deputies, meanwhile, have lashed out against the Biden White House for interfering in what they see as internal Chinese matters.