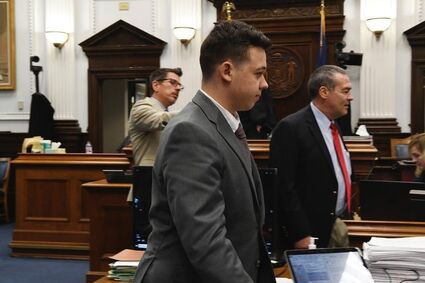 Kyle Rittenhouse and Assistant District Attorney Thomas Binger, left, and defense attorneys Mark Richards look at a video during Rittenhouse's trial at the Kenosha County Courthouse in Kenosha, Wis., on Friday, Nov. 12, 2021. Rittenhouse is accused of killing two people and wounding a third during a protest over police brutality in Kenosha, last year.

KENOSHA, Wis. - Kyle Rittenhouse provoked bloodshed on the streets of Kenosha by bringing a semi-automatic rifle to a protest and menacing others, and when the shooting stopped, he walked off like a "hero in a Western," a prosecutor said in closing arguments Monday at Rittenhouse's murder trial.

But Rittenhouse's lawyer countered that the shooting started after the young man was ambushed by a "crazy person" that night and feared his gun was going to be wrested away and used to kill him. Defense attorney Mark Richards said Rittenhouse acted in self-defense.

After a full day of arguments, the jurors were told to return Tuesday morning for the start of deliberations in the case that has stirred fierce debate in the U.S. over guns, vigilantism and law and order.