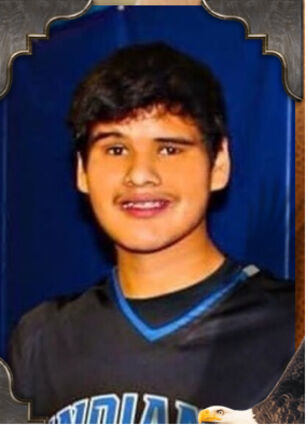 Lee Alexander Lenoir was born on March 1, 1996, the son of Neva Whiteshield and Lee Lenoir Sr. He was raised throughout his life by his beloved grandparents, Duane and Elaine Guy and special Mom, Miranda Guy. Lee grew up on the Spirit Lake Nation, attended Four Winds High School and graduated in the year 2014 as Salutatorian of the class of 2014. Throughout his school years he obtained many achievements, honors, awards, always maintaining a high GPA. He continued his education at CCCC for carpentry and HVAC. Lee played basketball and football throughout his school years.

Sports were Lee's thing, a big part of his life. His favorite college basketball team was Duke University and he already had claims for them this year and every year. His favorite NBA team was the Celtics and favorite football team the 49ers. He was always watching videos or redoing moves over and over until he achieved what he wanted. He was always so persistent in that way.

Lee me his sweetheart Samantha Azure in 2013 and were best friends until January 2015, that is when they made it official. He was a proud father of his boys. He always encouraged them to be who they were. They would get in trouble, but Lee could not stay mad at them long enough, he would hug them right away and try to understand them. He was the fun parent, the one who spoiled them the most, with his time. He always put everyone before himself. He let Samantha pursue different things while he stayed home to watch our boys. Jr. encouraged everyone to try and be their best self. He never judged, never held grudges, and always gave to people even when he could not afford too. He loved his close friends and family, always so happy for everyone who would tell us some of their good news. He cheered on and supported everyone. He was very happy to provide for his boys. He always said he was a simple man, that it did not take much to make him happy. He hated when people would complicate things that could be so simple. He wanted everyone to get along, to start being better not only for themselves but for future generations. Lee spent his last days surrounded by so much love. He was outspoken, strong, and fierce. He had a smile that could dazzle anyone. He loved sports, music, playing Play Station and on-line games.

He loved Lucas Coly (Numb and 5 On It), loved Kobe Bryant (studied him and all his moves), watched basketball players to be able to play like them (said he played like Carmelo Anthony). He loved playing online with his friends, bragging about how good he played. He was able to do anything he set his mind to. He protected and looked out for his sisters and brothers. He loved his nieces and nephews dearly, his family meant the world to him. He helped people so willingly, never complained even when he was hurt. His boys were the light of his life, he was an amazing father, wonderful boyfriend, grandson, son, brother, and uncle.