Are YOU the next Greg Heffley, Rowley Jefferson, or Patty Farrell? 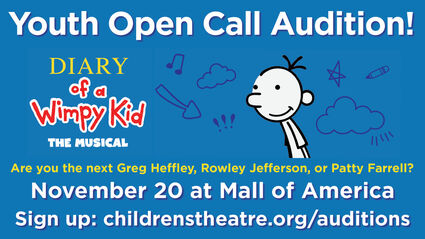 Minneapolis, Minn. – Tony Award-winning Children's Theatre Company is holding auditions for all student roles for its original smash-hit production of Diary of a Wimpy Kid the Musical at Mall of America's Huntington Bank® Rotunda on November 20, 2021 from 9:30am-1pm. Based on author Jeff Kinney's incredible hit book series, this production premiered at CTC in 2017 to rave reviews. CTC is encouraging students of any/all genders, racial backgrounds, abilities, and experience levels to audition. All student roles are being considered for this and other CTC productions through this audition. There will be an additional call-back audition in the afternoons on November 20 and 21, 2021 at CTC.

The theatre is especially looking for strong actor/singer/dancers grades 4-12 (ages 10-18) that are, or will be, fully vaccinated for COVID-19 by February 1, 2022. Must be available for rehearsals and shows beginning March 19, 2022 through June 18, 2022 (with a possible 2-week extension). Young actors wishing to audition can sign up for a timeslot on CTC's Audition Page. A select number of spots in each timeslot will be held for those wishing to sign-up the day of the audition.

CTC is also looking for youth that are Black/African American, White/Caucasian female, Asian American, Southwest Asian, North African, and East African actors to audition for Something Happened in Our Town on November 14, 2021. All of the children are about 8 years old in the play-however we will be casting only youth 10 and up, anticipating those cast under age 12 will be vaccinated prior to rehearsals beginning. See https://childrenstheatre.org/about-us/work-with-us/auditions/#auditions-listing

Middle school, ugh. It's the worst. But Greg is determined NOT to be at the bottom of the popularity chart. He'll leave that to his weird neighbor, Fregley. Or maybe Greg's best friend, Rowley Jefferson. But it's not going to be Greg... no way.

See Jeff Kinney's popular character take center stage as Greg's cartoon diary becomes a hilarious and heartfelt musical. Will Greg's plans lead him to sacrifice his one true friend? Can anyone avoid the dreaded Cheese Touch? Grab a hall pass and don't be late for an adventure familiar to anyone who actually survived middle school!

What: Student actor auditions for Children's Theatre Company's production of Diary of a Wimpy Kid the Musical

Details: Visit childrenstheatre.org/auditions for complete details and to sign up for an audition slot.

Children's Theatre Company (CTC) is the nation's largest and most acclaimed theatre for young people and serves a multigenerational audience. It creates theatre experiences that educate, challenge, and inspire for more than 250,000 people annually. CTC is the only theatre focused on young audiences to win the coveted Tony Award® for regional theatre and is the only theatre in Minnesota to receive three Tony® nominations (for its production of A Year with Frog and Toad). CTC is committed to creating world-class productions at the highest level and to developing new works, more than 200 to date, dramatically changing the canon of work for young audiences.

CTC's engagement and learning programs annually serve more than 93,000 young people and their communities through Theatre Arts Training, student matinees, Neighborhood Bridges, and early childhood arts education programs. ACT One is CTC's comprehensive platform for access, diversity, and inclusion in our audiences, programs, staff, and board that strives to ensure the theatre is a home for all people, all families, reflective of our community. childrenstheatre.org