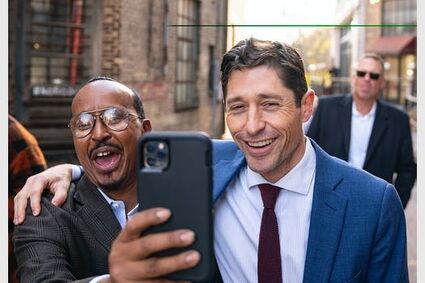 Kadir Abdulle takes a selfie with incumbent Minneapolis Mayor Jacob Frey as they walk back to the campaign office after holding his first news conference since being declared the winner of the 2021 election Wednesday, Nov. 3, 2021 outside Loring Corners in Minneapolis. Abdulle ran the Somali canvass for Mayor Jacob Frey's campaign.

Minneapolis Mayor Jacob Frey won a second term, defeating opponents who aligned against him in a campaign focusing heavily on his track record on policing.

City officials announced that Frey won after two rounds of ranked-choice voting tabulation. Challenger Kate Knuth came in second in the final round, pulling in 38% of votes compared to Frey's 49%.

In a victory speech Wednesday afternoon, Frey said the election marked a turning point for the city to put aside politics and unite to address safety, accountability, economic inclusion and affordable housing.