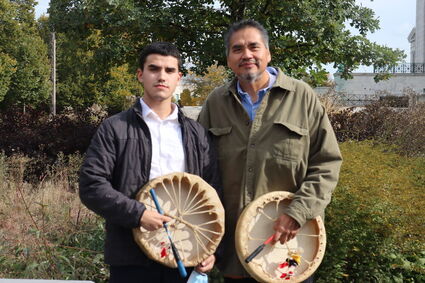 David and Niyel Spencer at the welcome event for the Field Museum's Native American Heritage month on November 1, 2021.

CHICAGO - Earlier this week, the Field Museum hosted a kick-off event for Native American Heritage month, a celebratory observance in the city of Chicago. An inter-tribal song by David and Niyel Spencer, both singers of the local drum group Red Line Singers, was organized by Field Museum staff to officially begin the month-long celebration at the world-renowned museum.

The museum organized a series of events about the objects at the museum, both at the museum and online with staff members and guest speakers. According to Field Museum staff, they have more than 770,000 items of Native American origin in their collection, but the public sees under 1% of the items on display.

The Field Museum has several Native American exhibits, including Pokagon Potawatomi Black Ash Baskets: Our Storytellers, Robert R. McCormick Halls of the Ancient Americas, Rice Native Gardens, which is outside of the museum and was where the kick-off event was hosted, and the Native North America Hall, which is closed until May 2022 and will reopen as a brand new exhibit, said Field Museum Conservation Technician J. Kae Good Bear to Native News Online.