On the NFL: The former Vikings running back signed on with the Titans after Derrick Henry suffered a broken foot 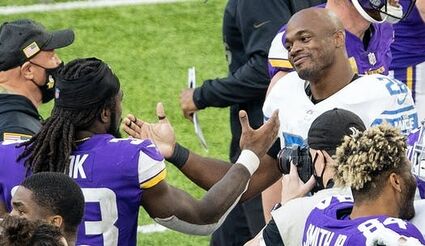 Minnesota Vikings running back Dalvin Cook, left, and former standout Adrian Peterson spoke at the end of a game in 2020.

Calvin Johnson, the NFL's second overall draft pick in 2007, caught his last pass on Jan. 3, 2016, exited the league and was enshrined into the Pro Football Hall of Fame as a first-ballot selection on Aug. 8, 2021.

Adrian Peterson, the seventh overall pick by the Vikings in 2007, had his last carry on Jan. 3, 2021, exited the league involuntarily for eight games and, believe it or not, is back with an AFC power that fits his throwback-era strengths perfectly.