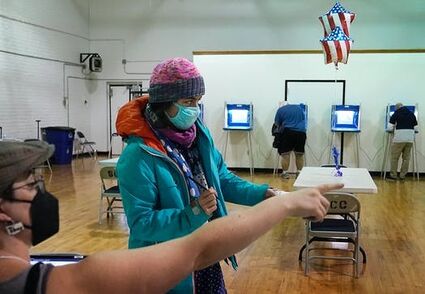 Monica Rojas gets directions from a poll worker on her way to casting her ballot at Sabathani Community Center during municipal elections Tuesday, Nov. 2, 2021, in Minneapolis.

All 13 Minneapolis council members were up for re-election Tuesday, with incumbents facing challengers from across the political spectrum. Polls closed at 8 p.m. Votes were still being counted as of press time, with most candidates who had pledged to defund and dismantle the police lagging behind challengers calling for less drastic reforms and continued support for police.

A slate of progressive representatives who vowed to end the Minneapolis Police Department following the murder of George Floyd scrambled to defend their seats against contenders zeroing in on the surge in neighborhood crime in the past year and a half.

Incumbents stepping down this year are Council President Lisa Bender of the 10th Ward and Alondra Cano of the Ninth Ward. Fourteen candidates in total are vying for their two seats.