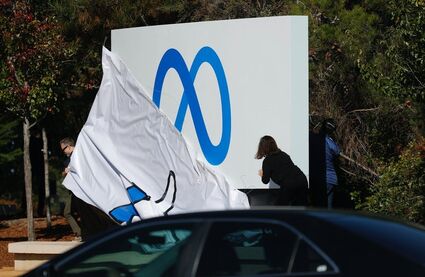 Facebook employees unveil a new logo and the name "Meta" on the sign in front of Facebook headquarters on Thursday, Oct. 28, 2021 in Menlo Park, California. A new name and logo were unveiled at Facebook headquarters after a much anticipated name change for the social media platform. (Justin Sullivan/Getty Images/TNS)

PROVIDENCE, R.I. - Facebook said it will shut down its face-recognition system and delete the faceprints of more than 1 billion people amid growing concerns about the technology and its misuse by governments, police and others.

"This change will represent one of the largest shifts in facial recognition usage in the technology's history," Jerome Pesenti, vice president of artificial intelligence for Facebook's new parent company, Meta, wrote in a blog post on Tuesday.

He said the company was trying to weigh the positive use cases for the technology "against growing societal concerns, especially as regulators have yet to provide clear rules." The company in the coming weeks will delete "more than a billion people's individual facial recognition templates," he said.