Three oppose Mpls. ballot question but haven't campaigned against it 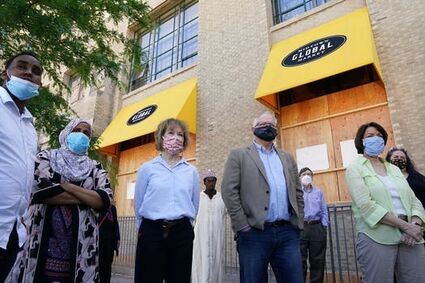 (From left) Sen. Tina Smith, Gov. Tim Walz and Sen. Amy Klobuchar are opposed to the Minneapolis policing ballot measure but are not actively campaigning to defeat it.

WASHINGTON – Three of Minnesota's leading Democrats oppose the Minneapolis ballot question that could replace the city's Police Department with a new public safety agency, but they aren't campaigning against it.

More than a year after George Floyd died at the hands of Minneapolis police, the divide over Question 2 has torn through established partisan political lines. With polls closing Tuesday, U.S. Sens. Amy Klobuchar and Tina Smith and Gov. Tim Walz have made their opposition clear but appear to be staying away from actively campaigning to defeat the measure.

The ballot question is a complicated one for Democratic politicians, said Kathryn Pearson, a University of Minnesota political science professor. It's a rare local measure that has attracted statewide and national attention.