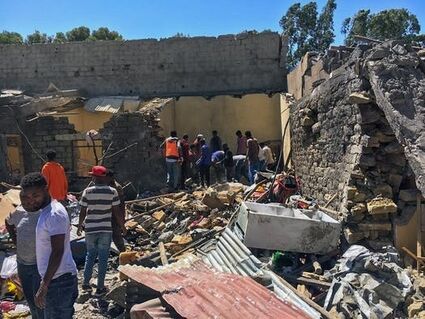 Residents sift through rubble from a destroyed building at the scene of an airstrike in Mekele, in the Tigray region of northern Ethiopia Thursday, Oct. 28, 2021.

NAIROBI, Kenya - Children were among 10 people killed when an Ethiopian military airstrike hit the capital of the country's Tigray region on Thursday, a doctor and a Tigray spokesman said. It was the deadliest of a new round of airstrikes that began last week as the year-long war intensifies.

International calls for a cease-fire have been in vain as Ethiopian and allied forces battle the Tigray forces who long dominated the national government before being sidelined by Prime Minister Abiy Ahmed. Thousands of people have been killed in Africa's second most populous country, and the world's worst hunger crisis in a decade has begun.

Government spokesman Legesse Tulu told The Associated Press the new airstrike targeted a site in Mekele city used by Tigray forces to make and repair weapons. He said the site forms part of a compound belonging to Mefsin Industrial Engineering, which was also hit last week.