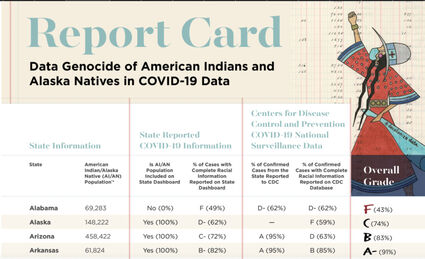 New York State is second only to Texas in its failure to collect and analyze COVID-19 data from American Indian and Alaska Native populations, according to a Urban Indian Health Institute (UIHI) study.

Published in February, the study ranked states based on their quality of COVID-19 racial data and their effectiveness in collecting and reporting data on Native populations. Texas got a grade of 20 percent, and New York 27 percent.

New York is among 16 states that fail to report data on COVID-19 among American Indians and Alaska Native people as a distinct demographic category. Rather, they lumped them in as "other." It was the only state that did not list complete racial information for any of the cases reported.