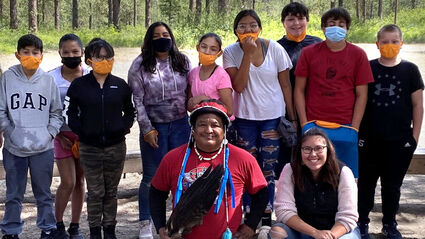 SEATTLE, October, 18 2021 – When COVID-19 began circulating throughout the population in March last year, many philanthropic foundations suspended their usual grantmaking programs and streamlined their processes to offer emergency funding.

Potlatch Fund, a Seattle-based Native-led foundation serving Washington, Oregon, Idaho and Montana, also suspended its usual grant programs to offer COVID relief funding to grantee partners. Then, as the pandemic continued and the foundation planned for the future, it decided to make some permanent changes in the way it disbursed grant funding.

The result of that planning was the Resiliency Fund, which began accepting applications this past June. Response to the Resiliency Fund has been so overwhelming, Potlatch Fund recently committed to raising an additional $7 million to fully fund the requests that continue to pour in.

"We started talking about how we could change our funding practices to be more in line with our Native values system," said Amber Shulz-Oliver, president of the Potlatch Fund board of directors. "What became apparent to us was that we needed to embrace a process that reduced barriers to funding in order to reach deeper into our communities than we had before. We needed to help in whatever way we could to address some of the inequities built into traditional philanthropy."

For Potlatch Fund leadership, the resulting flood of funding applications-a high proportion of them from first-time applicants-was a surprise and also a sign that there were immense needs in both urban and ruralNative communities that were going unmet.

"COVID has pulled back the curtain on the inequities that continue to affect Native Americans," said Cleora Hill-Scott, Potlatch Fund's executive director. "They've existed for a long time, but it was easier to ignore them until COVID came along. Our Native relatives have poorer access to health care and have been dying from COVID at more than three times the rates of White Americans in some areas. Our Native youth are more than twice as likely to die by suicide. In some places, even access to food is challenging. How are you supposed to stay healthy when you can't feed yourself healthy food?"

And there is a problem with only using statistics to convey the true impact of COVID on Native communities, according to Hill-Scott. "Statistics don't really tell us what it means to a community to lose its elders, who are often the only people in a Tribe who speak the Native language or who know traditional ways. When they die, they take a Tribe's culture with them, and the loss of that is immeasurable," she said.

The Resiliency Fund is based upon two foundational beliefs: that it's the people "on the ground" in Native communities who know best what their communities need, and that they can be trusted to meet those needs when given adequate support.

"A lot of traditional philanthropy is built on mistrust," Hill-Scott said. "Whether it's from barriers that prevent people and organizations from applying, or from really complicated reporting requirements, or from the impersonal and mostly transactional nature of the process, it's intimidating for a lot of people. We are seeking to change that."

Both individual Native artists and primarily Native-serving organizations are eligible to apply for grants. The applicants so far represent a broad line-up of projects, from preserving Native languages for future generations to creating sustainable supply chains to supporting food sovereignty efforts to mentoring Native youth to connecting youth and elders to document oral histories, and more.

The sheer number of applicants and the unmet need revealed by the Resiliency Fund led Potlatch Fund board and staff to commit to raising an additional $7 million to keep the fund open for the foreseeable future.

"COVID is going to be with us for a while," Hill-Scott said. "And even after it's in retreat, the impact on our communities will be felt for years to come. What we are saying with the Resiliency Fund is look, we trust our communities themselves to hold the answers for healing. We believe in their wisdom and strength. They've shown us that they know best what their communities need. They are the ones who give us hope."