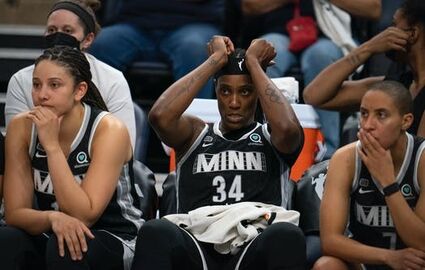 Lynx center Sylvia Fowles (34) and teammates Natalie Achonwa (11) and Layshia Clarendon (7) sat on the bench in the fourth quarter.

In a single-elimination second-round game, the Chicago Sky advanced to the WNBA semifinals with an 89-78 victory over the third-seeded Lynx.

Sudden as it was, it was not a fluke. The Sky – which advanced to the game with a first-round win over Dallas – was able to get good shots most of the game against the Minnesota defense. The Sky shot 49.2 percent overall – 63.4 percent on two-pointers.