'We were them': Vietnamese Americans help Afghan refugees 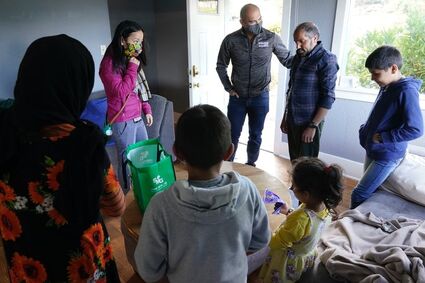 Thuy Do, second from left, and her husband, Jesse Robbins, center, talk with Abdul, second from right, and his family, after they stopped by the vacant rental home they own in Seattle, Monday, Sept. 20, 2021, to drop off produce from their garden and check on the family. Abdul worked as a mechanic before leaving Kabul, Afghanistan about a month ago, and Do and Robbins have provided the house as a place for them live until they can find more permanent housing. Do was nine years old when her family arrived in the United States from Vietnam in the 1980s, and that memory led Do and Robbins to reach out to assist Afghans fleeing their country.

WESTMINSTER, Calif. - In the faces of Afghans desperate to leave their country after U.S. forces withdrew, Thuy Do sees her own family, decades earlier and thousands of miles away.

A 39-year-old doctor in Seattle, Washington, Do remembers hearing how her parents sought to leave Saigon after Vietnam fell to communist rule in 1975 and the American military airlifted out allies in the final hours. It took years for her family to finally get out of the country, after several failed attempts, and make their way to the United States, carrying two sets of clothes a piece and a combined $300. When they finally arrived, she was 9 years old.

These stories and early memories drove Do and her husband Jesse Robbins to reach out to assist Afghans fleeing their country now. The couple has a vacant rental home and decided to offer it up to refugee resettlement groups, which furnished it for newly arriving Afghans in need of a place to stay.