Fencing goes up around Capitol again, as police brace for January 6 rally 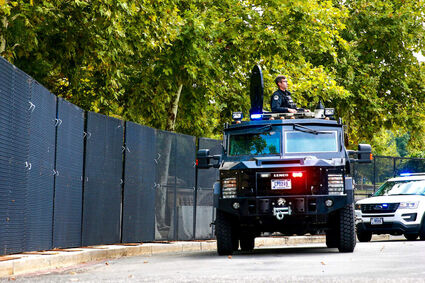 U.S. Capitol Police Officer Curtis Henry mans an armored vehicle outside the fenced-in perimeter of the Capitol on Thursday afternoon, as police gear up for this weekend's rally. Photo by Diannie Chavez / Cronkite News)

WASHINGTON – Fences, cameras and barricades went up around the Capitol early Thursday, as federal and local police braced for possible violence at a Saturday rally defending those who were arrested in the Jan. 6 insurrection.

Organizers of the "Justice for J6" rally said they expect as many as 700 people – but if anyone is coming from Arizona, they were not saying. GOP Reps. Paul Gosar of Prescott and Andy Biggs of Gilbert, who took part in rallies this summer for the January 6 "political prisoners," did not respond to repeated requests for comment this week.

While organizers were promising a peaceful event, police were preparing for the worst, putting outside police agencies and the National Guard on standby, monitoring internet activity and setting up the fencing around the Capitol grounds and the Supreme Court.