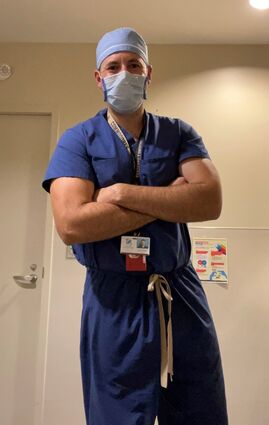 An Army surgeon, Dr. Wallace finds time to work out twice a day to prepare for his IRONMAN competition.

Chris Wallace is no stranger to pushing the boundaries of his physical and mental endurance. A graduate of both the U.S. Military Academy at West Point and the Vanderbilt University School of Medicine, he has already pushed both his mind and body. Not one to shirk a challenge, Dr. Wallace has decided this year to train and compete in an IRONMAN competition.

Currently an active duty captain in the U.S. Army stationed at Joint Base Lewis-McChord near Tacoma, Washington, Wallace has reached out to the Chickasaw Warrior Society to embody the Chickasaw warrior spirit in his upcoming challenge. The warrior society has sent him sportswear, limited sports gear and items for the competition.

IRONMAN competitions are a grueling test of endurance and are some of the most well-known triathlons in the world. Wallace has been training for this IRONMAN competition for more than 10 months. The half-triathlon he is entering will include a nearly 2 km swim, 90 km bike ride, followed by a nearly 22 km run. These will be completed in succession with no rest between.

Wallace has led an interesting life. He was a cadet at West Point Military Academy, lived with his parents in the Middle East for several years and is currently finishing his medical residency.

"My family is originally from Oklahoma – the Ardmore area," Wallace said. "I spent a lot of time in the Ardmore area as I was growing up. When I was 9 years old, I moved overseas. My dad's job was with an oil company. I lived in the Middle East until I graduated high school."

His time spent in Middle Eastern countries profoundly affected his future military career and education choices. He went to high school with others from all over the world and many from countries in the Middle East in particular.

"Graduating from West Point, everyone expects you to go into the combat arms branches of the services," Wallace said. "Infantry, artillery and the like. I wanted to be in the infantry when I first started. I went to airborne school and learned how to jump out of planes. Then, during my sophomore and junior year at West Point, the Arab Spring happened."

The Arab Spring – a series of anti-government protests, uprisings and armed rebellions in the Arab world – would shape the warrior Wallace chose to become. It influenced his decision to study medicine.

"I had to choose what I was going to do in the military. Arab Spring was a politically turbulent time in the Middle East. I am by no means a conscientious objector, but I was having a sort of crisis, because the countries I grew up in were in turmoil. I did not want to have to potentially fight in countries where I both lived or had friends with their families. I was in an ethical dilemma. In medicine, I am able to serve my country and get to take care of everybody. Once I realized that was an option, I was sold."

Wallace cherishes his time spent at West Point. His service acknowledges his grandfathers, who both served in the military, as one reason he wanted to serve. He believes West Point is not your typical college experience. It provided him with core strength, both mentally and physically, needed for medical school and his upcoming IRONMAN race.

"I have never been one to shy away from a challenge," Wallace said. "I wanted to go to West Point to see if I could do it. I was an athlete in high school, but we were trained to be in great shape at West Point."

Wallace's Chickasaw heritage comes from his father's side of the family. Like both his grandfathers before him, he is a proud warrior.

"I heard about the warrior society from my aunts and uncles who are still living in the Chickasaw Nation," Wallace said. "My aunt saw someone with a warrior society jacket on. She looked into it for me. I applied and have been happy with the communication with the warrior society. It makes me feel amazing that our tribe honors me and others. I get to see firsthand young and old soldiers. It is awesome to see the tribe have so much influence, and they're using it in so many positive ways."

Training in the morning and evening, Wallace spends on average three hours a day exercising. Wallace has received support from friends and family in his IRONMAN endeavor. He follows a strict diet. As a physician, he finds it sometimes difficult to find time for group sports. However, training and competing for IRONMAN is something he can do at his own pace.

"I was an athlete in high school and college," Wallace said. "When I went into the medical world it was hard to compete (in sports). You spend so much time at the hospital and studying. I didn't start really enjoying endurance sports until recently, when I realized I could do it on my own."

According to Wallace, friends got him into the sport just before the COVID-19 pandemic hit the U.S.

"I have to stay fit for the service," Wallace said. "Not having a challenge didn't really do it for me. However, a few of my friends introduced me into the triathlon sport. I went out and got a bike. The Washington area is beautiful. Biking and running really lets me see the area, explore and stay active."

Wallace is no stranger to endurance races. He has run both half-marathon and full marathon races while a cadet at West Point. He was a swimmer in middle school. However, the bike portion of the IRONMAN triathlon will be his first competitive bicycle race.

"I get up early in the morning and will do either a quick bike ride, outside, or on my indoor bike that I have," Wallace said. "When I get home in the evening I either go for a run, or put on the wet suit and go for a swim in one of the nearby lakes."

According to Wallace, the IRONMAN triathlon has come to mean a lot to him, especially during the pandemic. IRONMAN gives him a sense of working toward something, without the need to be in a group setting.

"One of the biggest pushes for me to work toward the IRONMAN competition was the COVID-19 virus closing down gyms," Wallace said. "It gave me a reason to go outside for a bike ride, run or to swim. It was really easy, because that was all there was to do."

Wallace feels confident in his upcoming race. Along with the physical aspect, he believes he is in a good spot mentally to not only finish the race, but to have a good time as well.

"I have experiences where I have wanted to quit," Wallace said. "You just work past it. Getting through tough situations at West Point or during my (medical) residency, seeing patients for 30 hours straight is tough. These were situations where I wanted to quit. You just work past it. I think all my training, for the military, medical and triathlon, has led me to this place where I feel confident in having the mental fortitude to complete anything."