About 200 foreigners, including Americans, fly out of Kabul 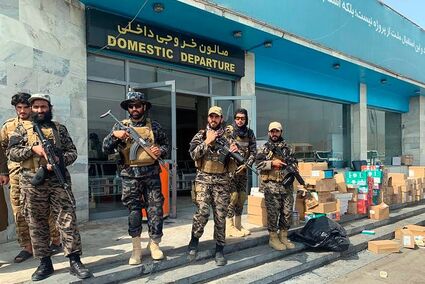 FILE - In this Aug. 31, 2021 file photo, Taliban fighters stand guard inside the Hamid Karzai International Airport after the U.S. withdrawal in Kabul, Afghanistan. Taliban authorities will allow between 100 and 150 Americans to fly out from Kabul in the coming hours, Qatari officials said on Thursday, Sept. 9, 2021, marking the airport's first such flight since U.S. forces withdrew from the country. The large group of foreigners, including Americans and other Westerners, would depart Thursday on a Qatar Airways flight that had earlier ferried humanitarian aid to the country, officials said.

KABUL, Afghanistan - An estimated 200 foreigners, including Americans, left Afghanistan on a commercial flight out of Kabul on Thursday with the cooperation of the Taliban - the first such large-scale departure since U.S. forces completed their frantic withdrawal over a week ago.

The Qatar Airways flight to Doha marked a breakthrough in the bumpy coordination between the U.S. and Afghanistan's new rulers. A dayslong standoff over charter planes at another airport has left hundreds of mostly Afghan people stranded, waiting for Taliban permission to leave.

A senior U.S. official, speaking on condition of anonymity because he wasn't authorized to talk to the media, said the Taliban's foreign minister and deputy prime minister helped facilitate the flight. Americans, U.S. green card holders and other nationalities, including Germans, Hungarians and Canadians, were aboard, the official said.