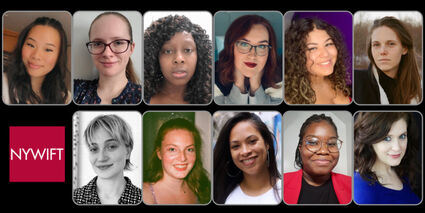 "We recognize the importance of nurturing aspiring women filmmakers at a crucial stage of their careers – as they are developing their skills, furthering their education, and honing their creative voice. We offer our heartfelt congratulations to the scholarship recipients and thank Ha Phuong for her generous support. We can't wait to see what incredible work these women will produce in the years to come," said NYWIFT Executive Director Cynthia Lopez.

The scholarships for the nine undergraduate and graduate students were presented thanks to the generous support of the Ha Phuong Foundation. The Ha Phuong Foundation is one of the largest of its kind and was founded by Vietnamese actor, singer, writer, philanthropist, and NYWIFT member Ha Phuong (HP), as a result of her passion for music and her fierce devotion to supporting young people's causes.

This year's NYWIFT Sabrina Wright-Gilliar Award, Academy for Careers in Television & Film (TvF) was presented to Casey Gibbons and Charlise Lebron. The scholarship honors the memory of the legendary prop master Wright-Gilliar (The Good Wife) and supports a high school senior committed to a career in production.

All were also welcomed into the organization's Next Wave membership program for emerging professionals.

New York Women in Film & Television (NYWIFT) advocates for equality in the moving image industry and supports women in every stage of their careers. As the preeminent entertainment industry association for women in New York, NYWIFT energizes women by illuminating their achievements, presenting training and professional development programs, awarding scholarships and grants, and providing access to a supportive community of peers. NYWIFT brings together more than 2,500 women and men working both above and below the line. NYWIFT is part of a network of 50 women in film chapters worldwide, representing more than 15,000 members. NYWIFT is a nonprofit 501c3 public charity.

More information can be found online at: http://www.NYWIFT.org. Follow on all social media platforms @NYWIFT.

Anne Bien-Aime (Hunter College) is currently pursuing a Bachelor of Arts degree in Media Studies with a concentration in documentary film and a minor in Human Rights at Hunter College. She is passionate about the exploration of human rights issues through cinematography. Bien-Aime hopes to explore and share stories based on unique characters filled with fresh perspectives. In addition, she not only want to expose problems but also investigate various solutions to said problems.

Mirta Desir (Feirstein Graduate School of Cinema) is a filmmaker in New York City and is a transplant by way of Haiti. As a young immigrant child in the U.S. she consumed books voraciously and films were a critical pathway for her to learn English. At Syracuse University, she fulfilled her passion for literature and art by receiving Bachelors in Philosophy and Communications. Soon after she obtained a Juris Doctor from Loyola University and practiced Civil Rights litigation. With a growing interest in film, she started writing while running a language focused educational startup. When not chatting with her favorite little nugget, you can find her collaborating with others on projects that she finds interesting. Desir is currently a student at Feirstein Graduate School of Cinema. She has produced, directed and written several short films, including, April 10th, Tomorrow There'll Be No Tears, and After the Raid, among others.

Amy Gaipa's (Stony Brook University) love of independent and developmental projects includes acting in Do You Want?; Girl in the Straw Hat; Good Grief; Silver Tongues; La Vida Inesperada; Trudy Bolt in Titanic; the Sloane readings at the Tribeca Film Festival; a slew of roles on stage including New York Madness, The Visiting Hours, and a summer stint at Steppenwolf; directing for stage and more recently, film: March, Whiskey Kills The Hunger (post), Rain-Quarters-Popcorn (in development); producing Trilogy of Lamentations (in development), Good Grief, Whiskey Kills The Hunger (post); Mastic Beach Mini Indie Film Festival (2019-present); and production design for Poor Arthur, WKH, Div Kid, Christmas: 1987, Brennen, Good Grief, and MBMIFF. Pursuing an MFA in Film Direction from Stony Brook University while teaching undergrad film production and analysis at Stony Brook has deepened her dedication to the craft of storytelling both in front of and behind the camera. Amy is a member of SAG-AFTRA, Actor's Equity, and very proud to be the 2021 recipient of the NYWIFT scholarship.

Casey Gibbons (Sabrina Wright-Gilliar Award, Academy for Careers in Television & Film (TvF)) is a recent graduate of the Academy for Careers in Television and Film and is now a rising freshman at Purchase College. She will be continuing her studies in the entertainment industry where she is excited to meet new people and be able to return to collaborating on creative projects. During her time at ACTvF, Casey was the secretary of her school's National Honors Society, a member of the Honors production class for film, and a captain for her Flag Football team. Casey is sad to leave behind ACTvF, but knows the relationships with her friends and teachers will last a lifetime.

Kayleigh Keane (Brooklyn College) is an undergraduate student at Brooklyn College pursuing a degree in Film Production. Kayleigh is honored to have accepted an internship with New York Women in Film & Television. She is passionate about entertaining people, writing stories, and seeing those stories come to life from beginning to end. Kayleigh is excited to further develop her skills at Brooklyn College. Keane also hopes to serve as a role model for young women who also want to have a career in film and television.

Charlise Lebron (Sabrina Wright-Gilliar Award, Academy for Careers in Television & Film (TvF)) grew up in Brooklyn, New York, and recently graduated from Academy for Careers in Television and Film. She has received an advanced regents diploma as well as a TvF diploma for outstanding academic and film achievements. Although she is currently working this summer, in the fall she will be heading to Quinnipiac University. Majoring in film, television, and media studies she will continue her academic film career in Connecticut. On her way to university she has been one of two recipients of the Sabrina Wright-Gilliar Award and is extremely grateful to not only have received this award but to share it with one of her close friends, Casey Gibbons.

Veronika Lucchese (Hunter College) hails from a small rural town in Ontario, Canada. Her parents raised her with a passion for movies, and as she grew older this turned into the determination to become a filmmaker. She is a lover of all genres but is majorly inspired by the films of Christopher Nolan, David Fincher, and Kathryn Bigelow, as well as the works of actors-turned-directors John Krasinksi and Jordan Peele. Veronika is currently in her third year at Hunter College, where she is majoring in Film and minoring in Media with a concentration in Psychology, and lives in the Bronx with her husband, stepdaughter, and many pets.

Hanna Gray Organschi (New York University) is a New York-based film director and writer from New Haven, Connecticut. She is currently pursuing her MFA in Film at New York University's Tisch School of the Arts. After graduating from Brown University with a Bachelors in International Relations and French Literature, Hanna got her start in film working alongside Academy Award-winning director/producer/actor Fisher Stevens, who she supported across his narrative, documentary, and short-form political activism projects for major platforms like Netflix, HBO, and National Geographic. She went on to assist director Antonio Campos on his Netflix original film The Devil All the Time. Hanna takes on the people and dynamics in her work that she is closest to, most afraid of, and endlessly intrigued by. Her recent short film Six Feet (made with her mother and her iPhone during quarantine) was featured in Vague Visages and screened at the 2020 Brown Media Group Film Festival. Her current short films, Bea, Seriously (in post-production) and Twentysomething (in development), along with her longer-form narrative films Heartland and Rubber Hut (both in development) explore strong, stubborn female protagonists who seek autonomy with self-knowledge. Her films are fueled by the central question: What is the process by which a young woman becomes herself?

Auralynn Rosario (City College) is an award-winning filmmaker and writer based in New York City, where she was born and raised. She holds a BA in English Language and Literature from Smith College and an MFA in Film Production from the City College of New York. Her first short documentary, Being Jezebel, which expounds on the stigmatization of Black women who do sex work, won the award "Best of Smith College," and was voted "Audience Favorite" at the 24th Annual Five College Film Festival. She is the 2020 recipient of the Helen Gurley Brown Magic Grant from Smith College, which funds the feature-length documentary version of Being Jezebel, which is currently in production. She is also a 2020-2021 British Academy of Film and Television Arts (BAFTA) Scholar. As a filmmaker, she strives to tell stories that challenge the status quo, raise questions, and affect social change. Her emerging themes include dismantling patriarchal systems, body autonomy, sex work, race, sexuality, and gender topics. 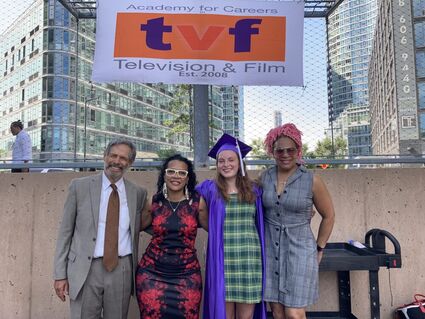 Celine Sutter (Columbia University) is a filmmaker and writer who was born and raised in New York City. Sutter graduated Cum Laude from New York University's Gallatin School of Individualized Study in 2018 with a double major in Environmental Justice and Filmmaking. Sutter is currently pursuing an MFA in writing and directing for film at Columbia University. Working in documentary, creative producing, cinematography, graphic design, illustration, or editing, Sutter enjoys the intersection of story and medium, reality and fiction. She is incredibly honored and excited to have been given this opportunity with New York Women in Film and Television. The opportunity is fueling the fire for a short film Sutter is directing this summer!

Tiffany Zeng (Brooklyn College) is a student at Brooklyn College, born and raised in Brooklyn, New York. Her passion for film began when she attended Mark Twain IS 239 as a student in the media program, and was made stronger during her time at Midwood High School. In her junior and senior years at Midwood, Tiffany was invited to the Citywide Graphic Arts Competition and had a film and some artwork displayed in the Brooklyn Borough Arts Festival in 2018. Tiffany plans on working in film and television and hopes to inspire other young women and minorities to follow their dreams in the industry, no matter how difficult the journey may be.