Man surrenders after claiming to have bomb near US Capitol 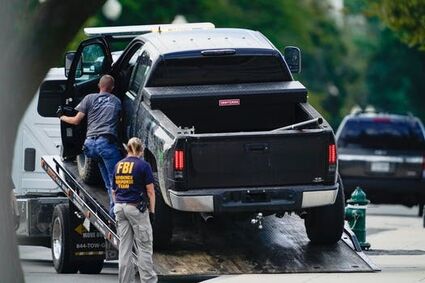 Authorities get set to tow a pickup truck from the sidewalk in front of the Library of Congress' Thomas Jefferson Building, Thursday, Aug. 19, 2021, in Washington.

WASHINGTON - A North Carolina man who claimed to have a bomb in a pickup truck near the U.S. Capitol surrendered to law enforcement after an hourslong standoff Thursday that prompted a massive police response and the evacuations of government buildings in the area.

Authorities were investigating what led the suspect, identified as 49-year-old Floyd Ray Roseberry, to drive onto the sidewalk outside the Library of Congress, make bomb threats to officers and profess a litany of antigovernment grievances as part of a bizarre episode that he live-streamed for a Facebook audience. Police later searched the vehicle and said they did not find a bomb but did collect possible bomb-making materials.

The standoff was resolved peacefully after roughly five hours of negotiations, ending when Roseberry crawled out of the truck and was taken into police custody. But even in a city with a long history of dramatic law enforcement encounters outside federal landmarks, this episode was notable for its timing - Washington remains on edge eight months after the insurrection at the U.S. Capitol - and for the way the suspect harnessed social media to draw attention to his actions in the hours before his arrest.