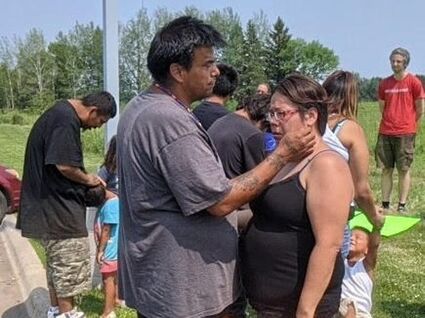 Family members of detainees at the Minnesota Sex Offender Program (MSOP) gathered on Sunday near the treatment center in Moose Lake. Carlos Taylor comforted his relative, Tara Sam, who just learned that her brother, one of the hunger strikers, had collapsed from fatigue inside the Moose Lake center. ] CHRIS SERRES • chris.serres@startribune.com

A group of men held at a northern Minnesota treatment center for sex offenders are entering their second week of an indefinite hunger strike that has led to the hospitalization of three of the men.

The hunger strike marks the second time this year that detainees at the center have gone without nourishment and has been organized to protest the historically low rate of release from the Minnesota Sex Offender Program (MSOP), which confines more than 740 men at prisonlike detention centers in Moose Lake and St. Peter. Some men have been held at the MSOP treatment centers for years or even decades after completing their prison terms - effectively turning the program into what detainees describe as a life sentence.

On Sunday, some family members of detainees participating in the hunger strike gathered for a protest outside the MSOP facility in Moose Lake, which is surrounded by fences topped with razor wire. A few said their loved ones inside the facility told them they were prepared to starve themselves to death. One woman, Tara Sam, broke down in tears upon learning that her brother, Jeremiah Johnson, among the hunger strikers, had just collapsed from fatigue. Three other hunger strikers have been taken to the hospital since Friday after falling unconscious, according to detainees and their relatives.

Iamsurviving.....are you that stupid....re offence rates are about 7 percent. Second lowest to murders. Almost all sex offenders have been molested as children too. Quit drinking the Kool aid and do research before you open your mouth. We should put you on there just so you can improve your understanding.

Everyone of those sex offenders ruined lives forever. I am a victim and my life has been traumatically impacted. Not just me, it’s a ripple effect of the others in my life that has been impacted by what happened to me! It’s sick. Real Sick! I have died a thousand deaths over my ordeal. They should NOT be released! EVER!! They don’t get rehabilitated. They will reoffend! Look at the re offend rates. I say, starve!