COMING ON EARTH DAY, INDIGENOUS WOMEN ARTISTS & THE 23RD POET LAUREATE OF THE U.S JOY HARJO JOIN THE INDIGO GIRLS AND BONNIE RAITT IN "NO MORE PIPELINE BLUES (ON THIS LAND WHERE WE BELONG)" 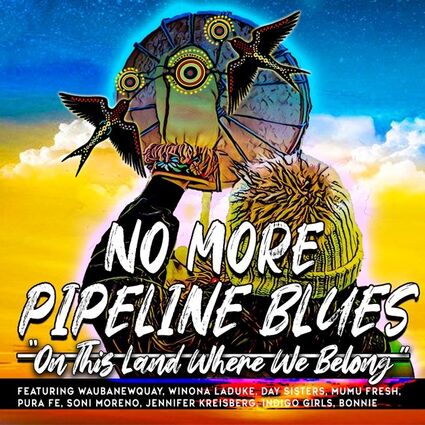 Rock the Cause Records Launches a New Single to Stop Line 3 in Minnesota as New Music Video Premiers on RollingStone.com

COMING ON EARTH DAY, INDIGENOUS WOMEN ARTISTS & THE 23RD POET LAUREATE OF THE U.S JOY HARJO JOIN THE INDIGO GIRLS AND BONNIE RAITT IN "NO MORE PIPELINE BLUES (ON THIS LAND WHERE WE BELONG)"

THE MOVING SONG AND VIDEO WILL SUPPORT 'HONOR THE EARTH'

Minneapolis, MN April 19, 2021 – On Earth Day, Mother Earth is going to get a lot of love from the Indigenous mothers, grandmothers, and others who are teaming up in song, spoken word, and video to push back against a new toxic, highly polluting tar sands oil pipeline. "Line 3" cuts through the heart of Native land and crosses more than 200 water bodies – including the Mississippi River twice – a drinking water source for millions of people downstream from the river's headwaters, which begins in northern Minnesota.

As Featured in Rolling Stone magazine:

Bonnie Raitt, Indigo Girls Appear on 'No More Pipeline Blues (On this Land Where We Belong)'

The supporting video is an action-packed mini-documentary, shining a spotlight on the Indigenous women-led resistance to the tar sands pipeline. Produced by Honor the Earth and Pickett Pictures, it is directed by award-winning filmmaker and photographer Keri Pickett and posted to the Honor the Earth YouTube channel revealing the powerful efforts on the land and water to #StopLine3.

Despite active, ongoing lawsuits in the Minnesota Appeals Court and in a Federal district court in Washington DC, the highly polluting pipeline is already half-built. Line 3 is owned by the Canadian multi-national, Enbridge, Inc., and dissects the heart of Anishinaabe territories and the most pristine and complex watersheds and ecosystems in the Land of 10,000 Lakes, including Lake Superior.

All Proceeds to Benefit the Non-Profit, Honor the Earth

All proceeds from the new single will benefit the environmental justice non-profit, Honor the Earth, co-founded by Indigenous leader Winona LaDuke and the Indigo Girls 28 years ago. The featured artists on "No More Pipeline Blues (On This Land Where We Belong)" include in the order of their contributions within the song:

"'No More Pipeline Blues' beautifully illustrates in music, singing, spoken word, and images the threats of a totally unnecessary tar sands pipeline at the end of the age of Big Oil. But it also illuminates the sacredness of our environment, and yet more destructive, historical impacts to Indigenous culture. Still, the song and the music video are also like prayer offered in ceremony, asking for strength, justice, and preservation." – Winona LaDuke, Honor the Earth

Access Video, WAV, and other media assets at the link below.